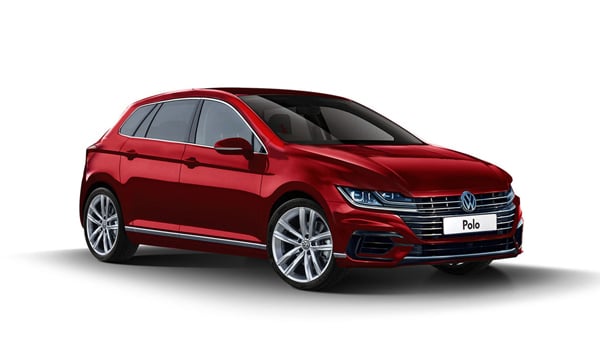 The Volkswagen Polo has been around for many years and has continually been seen as tried and trusted, dependable and very versatile.

Since its launch in 1975, the VW Polo has been known for its reliability and build quality and this is one reason why the car has had a better survival rate than many of its competitors.

The Polo has sold more than 1.4 million examples in the UK and more than 14 million worldwide, and over the last 43 years each one of the last five generations has seen the Polo continue to give a grown-up feel, rather than an ageing one.

Many of us have owned at least one Polo in our car buying history and the continued popularity of the Polo in the used car market bears this out.

The main focus of the new sixth generation Volkswagen Polo is a major increase in cabin and luggage space.

The interior has also been given a make-over and has been fully developed for the modern motoring era, the new Polo is the first car in its class to offer entirely digital instruments and is available with the latest infotainment technology, including Apple CarPlay and Android Auto smartphone mirroring.

The MK6 Polo also features a good number of steering wheel and seat adjustments, which together with the very comfortable and supportive seats, will allow the driver to find the perfect and most comfortable driving position. Hopefully Volkswagen are also fitting luxury mats for the Polo to really ooze the sense of comfort and interior styling the MK6 promises. If not, you know where to find them.

The exterior design has been made more powerful and expressive and has larger external dimensions to assist the debut of the five new engines. The MK6 comes with a range of 1.0 3 cylinder engines and the option of the new 1.5 TSI “EVO” engine, while the GTI model has a 1.6 TDI or 2.0 TSI engine.

The new generation Polo has more safety features as standard than the MK5, including Front Assist with Pedestrian Monitoring and City Emergency Braking. As well as benefitting from more airbags than ever before, the new Polo also has the addition of a curtain airbag system for both the driver and the passengers, which is designed to protect from head injury in the event of an accident.

The MK6 also offers greater scope for personalisation with a choice of 14 exterior colours. You can also specify a contrasting roof, choose from a variety of alloy wheel designs and opt for an R Line trim to give the car a sportier look.

The new Volkswagen Polo MK6 has signaled the growing up of the Polo in every sense and the appeal of the VW Polo will probably never diminish, at the very least, not for a very long time.

Drive an earlier Volkswagen Polo than the MK6? We manufacture both tailored luxury velour and heavy duty rubber car mats for the VW Polo in a variety of custom trims to choose from – and if you own a MK1 or a MK2, why not drop us an email and we will see what we can do.