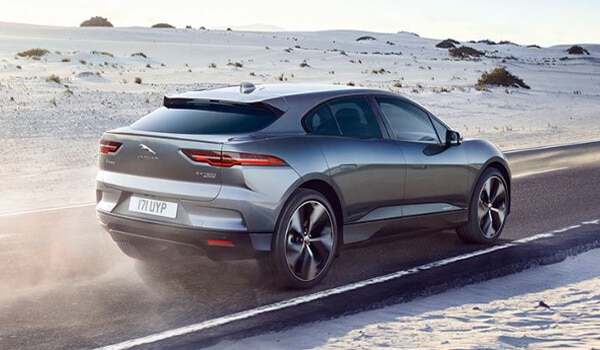 The I-Pace was also voted the Best Alternative Fuel Car, as Jaguar picked a trio of top-spot’s at the awards ceremony held at the Dalmahoy Hotel and Country Club in Edinburgh last night.

The F-Pace’s ‘little brother’, the compact performance SUV, the E-Pace, completed the hat-trick of awards, as it beat all rivals to collect the Best Premium SUV title.

This latest recognition from the Association of Scottish Motoring Writers is the fourth time Jaguar has received the top honour and comes days after the I-Pace was named as the first-ever German Car of the Year on Tuesday.

John Murdoch, President of the Association of Scottish Motoring Writers, said: “The I-Pace SUV is the most stunning car produced by Jaguar since the E-Type. It is the most exciting car currently on the market and it fully deserves the Scottish Car of the Year crown.

“It looks great, drives superbly and offers all the luxury you would expect from a Jaguar. At the same time it is a huge step forward for the company and a game-changer for electric vehicles in general.”

The Jaguar I-pace has already collected 16 major honours since it was revealed to the world in March, including being named Car of the Year by the Sunday Times, Auto Express and T3 as well as being called a ‘Game Changer’ by Autocar.

Ian Callum, Jaguar Design Director, said: “Scotland has a long history of design excellence, and as a Scot, it is a huge honour to be awarded Scottish Car of The Year for I-Pace.

“Development of the I-Pace started many years ago, with design and engineering working closely to achieve a vision to create not only the best electric vehicle but the best car, all round – and this award really affirms that”.

The I-Pace is an all-electric performance SUV that puts Jaguar at the forefront of the electric vehicle revolution.

The I-Pace offers sports car performance – it is capable of doing 0-60 in 4.5 seconds –  with zero emissions, making it both a practical and exhilarating SUV, and as you would expect from Jaguar, it is packed full of the latest innovations.

Jaguar’s first all-electric vehicle can achieve a 0-80 percent battery charge in 85-minutes using public DC charging (50kW) and can achieve the same state of charge in just over ten hours when home charging via an AC wall box (7kW) – ideal for overnight charging.

We are the first to provide aftermarket car mats for the I-Pace – as well as the new E-Pace – and car mats for both models join our illustrious collection of tailored Jaguar car mats.

Proud to be British …