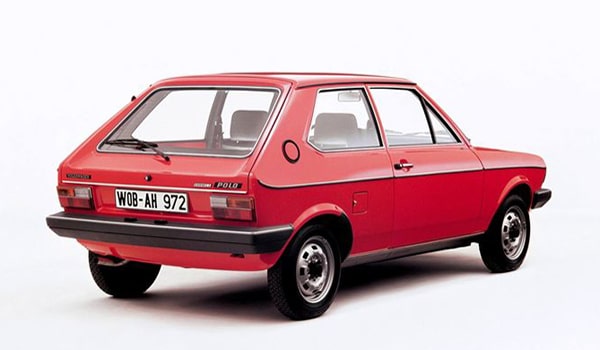 With the introduction of the new Volkswagen Polo, the MK6, the sixth-generation Polo promises to continue the legacy of this dependable and very versatile ‘supermini’ that has lasted 43 years.

The Polo, known for its build quality and reliability has maintained a higher survival rate than many of its competitors and the car’s appeal can be seen in the continued popularity of the Polo in the used car market.

Volkswagen Polo – the car that continues to grow up

The longevity of the VW Polo has also been assisted by adapting to change and the six generations and a small amount of facelifts have continued to keep the Polo very much alive and well.

The first generation Polo was introduced in 1975 and was a rebadged version of the Audi 50 with some minor differences. The Polo was cheaper and much more basic and initially the two cars were sold alongside each other, but the Audi 50 was withdrawn in 1978 due to poor sales.

The Derby saloon was introduced in 1977, which was basically a Polo with a boot.

Both models were given a facelift two years later, which included plastic bumpers, a new front grille and a revised dashboard.

The second generation Polo was introduced in 1981 with a new body style featuring an almost vertical rear window. Sold as a coupe it was in fact a three-door hatchback. The saloon version beacame the Polo Classic and the Derby name was withdrawn.

The MK2 was given a facelift in 1990, which included square headlights, bigger bumpers, enlarged and reshaped tail-lights and a new interior.

The MK2 proved popular in the UK and competed for space with the Peugeot 205, Nissan Micra and Fiat Uno.

The MK3 was launched in 1994 and was a completely new model, available as both three and five-door hatchback versions. Although the dashboard and some mechanical components, including engines, were shared with the SEAT Ibiza.

A year later the saloon and estate versions of the Mark3 were introduced, but they were basically a rebadged version of the SEAT Cordoba.

A facelift in 1999 saw updated styling including new headlights and bumpers and a new interior. Twin airbags were also made standard. The saloon and estate versions however only received the new interior.

The Mark3 was also a strong seller in the UK and continued to give strong competition to the Nissan Micra as well as the Fiat Punto.

The MK4 went on sale in 2002 and was all new compared to the MK3, although it did bear an uncanny resemblance to the Golf MK4 and the rear tail lights were similar to the Passat.

The MK4 had high expectations but began to fall behind crucial rivals, namely the Ford Fiesta, Peugeot 206, Citroen C3 and Vauxhall Corsa. The MK4 was given an obligatory facelift in 2005 and featured the new Passat style one piece headlights and tail lights as well as a different hatch.

Tailored car mats for the VW Polo MK4 (2002-2009) model are available in a choice of luxury velour or for more heavy duty use we also manufacture tailored rubber mats for the MK4.

The MK5 was longer and wider than the MK4 and benefitted from increased storage space. It was also 7.5% lighter than its predecessor.

Tailored car mats for the VW Polo MK5 (2009-2017) model are available in a choice of luxury velour or for more heavy duty use we also manufacture tailored rubber mats for the MK5.

Here’s to six generations of the Volkswagen Polo – facelifts and all.